Based in Los Angeles, Monrow makes and sells fashion with ultra-soft fabrics and quality designs, and has become a celebrity favorite fashion brand as a result. Monrow can be found in more than 500 boutiques and department stores, including Shopbop, Revolve, Saks and Bloomingdale’s, in addition to its robust direct-to-consumer site.

Founded by two alumni of Otis College of Art and Design in Los Angeles, who later struck up a friendship and became co-founders, Michelle Wenke and Megan George identified opportunity in the market for luxury leisure wear in neutral tones.

It has become the reference brand in comfortable and home fashion, fashion to be and work from home (something more in vogue than ever) and to do it with style.

Since 2007 Monrow has captured the essence of elevated loungewear with simple, quality pieces that fit into anyone’s wardrobe. It has become the go-to brand for celebrities like Oprah, Michelle Obama, Reese Witherspoon, Gwyneth Paltrow, Beyonce, Kate Moss, and Kris and Kylie Jenner.

At the time, around the mid-2000s, this was the era known for dazzling, flashy-hued tracksuits—essentially the complete opposite of what Monrow later became. 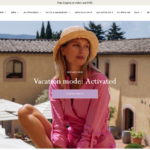